When it comes to our bodies, most of us have more fat than we’d like, and our muscles aren’t as toned as we’d like.

At Dr. Jensen’s we have an amazing non-invasive treatment that can do something about both of those issues. It’s called Emsculpt Neo. This new treatment from BTL combines the delivery of two different types of energy to simultaneously lose fat and build muscle. Talk about a daily double!

We offer Emsculpt Neo for our patients from Layton and across Utah. 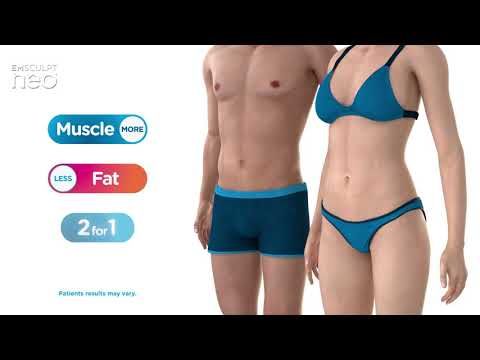 What is Emsculpt Neo?

If you follow the aesthetic world, you may have heard of Emsculpt, a single treatment that used high frequency electromagnetic energy to create a crazy amount of muscle contractions in 30 minutes to tone areas such as the abdomen and buttocks.

What does this combination do? The RF energy breaks down up to 30 percent of the fat in the area, and the HIFEM energy builds muscle mass by stimulating 20,000 contractions is a 30-minute treatment.

That’s a 2-for-1 boost for body contouring.

How does Emsculpt Neo work?

Emsculpt Neo is based on an applicator simultaneously emitting synchronized RF and HIFEM energies. Here’s what that does.

Due to the radiofrequency heating, the muscle temperature quickly rises by several degrees. This prepares the muscles for exposure to stress, just as a warmup does before you exercise. But this warming goes beyond a warmup. In less than 4 minutes, the temperature in the subcutaneous fat reaches levels that cause apoptosis, fat cell death. Clinical studies used to gain FDA clearance showed on average a 30 percent reduction in subcutaneous fat in the treatment areas. That’s the RF side of Emsculpt Neo.

At the same time as it delivers the RF energy to heat and destroy fat cells, the Emsculpt Neo applicator also delivers high intensity focused electromagnetic energy. This intense HIFEM energy causes the muscle fibers in the treatment area to contract at intensities that aren’t achievable during a normal workout. It’s like doing 20,000 crunches for your abdomen…in 30 minutes! This extreme stress forces the muscles to adapt, resulting in an increase in the number and growth of muscle fibers and cells. Clinical studies (again used for FDA clearance) have shown on average a 25 percent growth in muscle volume after an Emsculpt Neo treatment series.

So, Emsculpt Neo melts 30 percent of the fat at the same time it’s building 25 percent more muscle. Now that’s making the most of your 30-minute session at Dr. Jensen’s!

Is Emsculpt Neo cleared by the FDA?

How fast will I see results with Emsculpt Neo? How many treatments will it take?

The protocol for Emsculpt Neo at Dr. Jensen’s is usually four 30-minute treatments, scheduled 5-10 days apart. From there, your body gets down to the business of removing the destroyed or damaged fat cells and this takes a few weeks to fully run its course. Each patient’s results can vary, but the best time to see your final results is about 3 months after the fourth treatment of your series.

How will my Emsculpt Neo session proceed?

Emsculpt Neo at Dr. Jensen’s is a simple treatment. You don’t need to do anything to prepare. You lie down while the applicators are placed over the treatment area. We then turn on Emsculpt Neo for your 30-minute session. During the treatment you’ll feel the intense heating of the RF energy, which is easily tolerated. And you have the sensation of the “supramaximal” muscle contractions. Again, this aspect isn’t painful at all, just a sensation you haven’t felt before.

Can you have Emsculpt Neo while you’re pregnant?

Can I have Emsculpt Neo if I’m a little above my ideal weight?

Whereas the original Emsculpt treatment was only intended for patients who were at their ideal body weight, Emsculpt Neo is available for patients with a BMI of up to 35. That’s because the addition of RF energy makes Neo a great way to lose up to 30 percent of the fat in the treated area.

No. You won’t lose noticeable weight with these treatments; you’ll lose fat and gain muscle. This is body contouring, not weight loss. As mentioned above, patients need to be at a BMI of no more than 35 to qualify for these treatments at Dr. Jensen’s.

Curious about whether  Emsculpt Neo can get you closer to your dream body? Contact us today to book a personalized appointment with Dr. Joseph Jensen, and learn whether the procedure is right for you. Call (385) 300-8026 or click here to send us an Appointment Request Form. Our practice looks forward to serving you!

Ready to get in
touch with us?

We’d love to meet with you to discuss your treatment options.